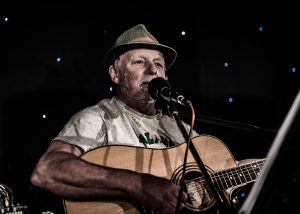 Alan has played for years and been a professional musician since the 1990s. He has been described as “having the voice of an angel”.

In Alan’s own words –

Alan Blakeman here. I sang in the school choir but the loss of both my parents at a young age left me shy and unsure of my talents.

My occupation as an aircraft fitter gave me the opportunity to work abroad in South Africa where an ex-professional footballer and team mate who had heard me sing encouraged me to sing in public. We went to a pub called The Copper Kettle in a place called Boksburg, and he told me to get up and sing or he would knock my teeth out, and as he was about 6’3” and built like brick s—t house I duly obliged. After that you could not stop me singing, and you still can’t!

On returning to the UK, I formed a folk band called Pikestaff and we ran a folk club at the Bath Hotel in Oldham for a number of years. On leaving Pikestaff, I joined a comedy band called the Dolly Lads performing in pubs and clubs around the North West of England. These were happy times for me but due to the death of a band member’s wife we had to disband.

In the early 90’s, following my heart, I went professional and began singing and guitar playing in a duo, with an accordion playing mate under the name of Milligan’s Wake and went to work playing Irish and Country music for the holiday trade in Tenerife. When the mate, due to family reasons, had to leave the duo, my accordion playing wife stepped into the breach. We worked together professionally for the last twenty years, playing all over the UK, but the 5 years spent in Cornwall, (1995-2000) were the most action packed.

Our agent at the time, Kernow Entertainments Agency, flew us by helicopter to the Scilly Isles to work. Following our appearance at the Exeter Music Festival over several years, the local TV newsreels ran an advertising clip featuring us. Our performance at the Weymouth millennium festival was an exciting (and televised) experience – we needed to work with the TV crew and hadn’t been on such a huge stage before, (or since). BBC radio Cornwall even had us on one of their programmes. In between we worked in many of the county’s top holiday camps and hotels.

We then returned to the North West and now, with my wife retired, the future again is changing with the new collaborative partnership with Steve, calling ourselves Shenanigans, because this captures the fun and joy in the Irish music we play.